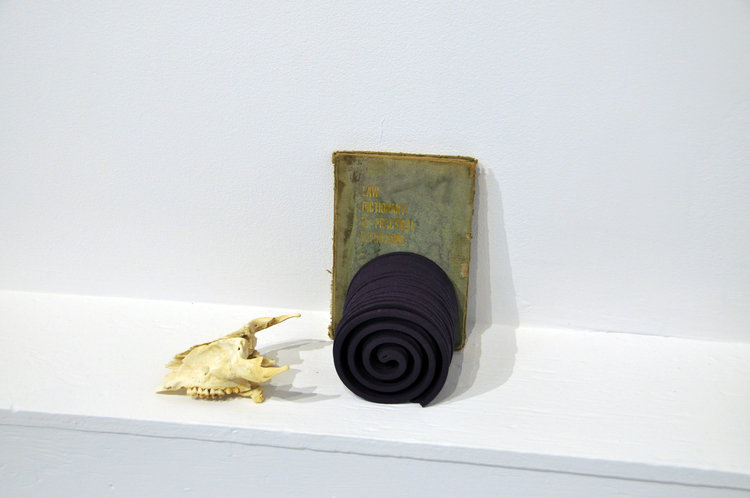 Exhibition Statement for Homecoming at The Bakery gallery

Kuh Del Rosario, (b. 1980 Manila, Philippines,) is a Vancouver-based painter and sculptor as well as the founder and Residence Director of Elmo’s House Artist Residency, a contemporary art project and studio/live space for local and international artists. Del Rosario graduated with a BFA in Painting from the Alberta College of Art and Design in 2003. In addition to painting, she sculpts and performs.

Del Rosario’s sculptures are gentle artifacts, remnants of a civilization sepia-tinted by childhood. Pastel-toned geometric shapes recur; they blend a mimicry of natural formations, like nodules of hardened geodes, with the angles of common Western construction materials. Walimang Tang, (2013,) a two pillared sculpture featured on her site and constructed from foam, acrylics, latex, plastics, and wood, could be the front doorway of a large house or its cinnamon slopes could be sandstone cliffs worn to undulations by the natural elements. The pieces meld nature with human habitation. The colours could be a memory of the brilliance that occurs in flora or part of a building softened by time, wind, sun, and rain. Objects are fossilized with layers of paint, then encrusted with broken glass. She becomes the agent of time and it a medium she manipulates. Outside of the techniques, the repetitions, and back-and-forths: the focal points of her work are the implications and narratives she creates via her acts of controlled weathering.

Del Rosario left the Philippines for Calgary, Alberta at the age of eight and returned eight years later, at the age of 16. Her childhood memories of Manila are textural images: rooms, colours, and streets. Memory is malleable and upon her reimmersion, she found the Philippines a different place, but was struck by the beauty of everything, particularly the visible hand of the maker personalizing homes and other structures. The DIY nature of the neighbourhood she returned to resonated with her, by showing the personality and ingenuity of the person who shaped that wall or repaired that roof. The builders share an inherent relationship with their materials, especially the reincarnations of recycled materials, like a vehicle tire which anchors a roof to keep it from flying off with the wind.

This inspired Del Rosario, who began to recognize and work with the narratives that become inherent in materials through their repeated use. Gravitating towards construction supplies, she distorts the narrative by reflecting on the traditional use of the material and recontextualizing it while referencing its original purpose. She began with a mixture of construction and found materials, but has narrowed her scope to reusing materials from her own spaces that are tied to her personal experiences. The work in Homecoming features sculptures inspired by and interacting with artifacts discovered in her ancestral home, inherited from her late father, Elmo, after which the residency is named. In addition, Homecoming displays pieces and remnants from the first year of resident artists at Elmo’s House.

Elmo’s House has been in Del Rosario’s family for generations, with rooms, floors, or additional buildings added by family members over the years. It’s the tallest building in the town of Batan, (taller, even, than the municipal building across the street!) Located within the province of Aklan in the Philippines, it flanks the central plaza with other houses built by the founding families. Her grandfather bought the land from extended family and constructed a two-story house in the 1960s. Her father added another two stories after his parent’s passing. The House is at the heart of the quiet fishing village, a short distance to secluded beaches and lush mountains. A multi-level six bedroom home, it offers residing artists two 2,500 square feet open-air floors designated as communal working areas and studios.

When Elmo’s House opened its gates for the inaugural art show, Pag-unawa¸ her relatives and the townsfolk were curious, because the house had never before been opened to the public. The most recent residing artist, Ashleigh Bartlett, finished her two-week residency with a show. She taught enthusiastic local kids an impromptu art class. Inspired by the local interest in participating, Del Rosario lined up the next show with a Batan fiesta in December. The exhibition will feature zines: accessible and tactile art that can be held, distributed, shared, and self-made. When someone visits the gallery, Elmo’s House will offer a trade: take one a zine from the exhibition and replace it with one of their own. It engages the community and holds space for people to tell their stories.

She wants zines by hyphenated Filipinos – or Filipinos who made their home elsewhere, like Filipino-Canadians – so, the local people can read the stories of Filipinos from other countries. Shared stories create understanding; life outside the Philippines has its own hardships that people there don’t experience, like racism. In addition, the hyphenated zine artists will be able to connect with their mother country without being there.

Elmo, the namesake of Elmo’s House Artist Residency and Del Rosario’s father, worked as a judge in the province of Aklan. A well-regarded figure in the community, he worked in Kalibo, the capital of Aklan, at the Kalibo Municipal Trial court, which serves the whole of the province. Del Rosario and he lived in different countries for most of her life, but he emphasized that the house would be hers and always home to return to. Opportunity for time with her father was always brief and Del Rosario struggled to make the most of it. She sought to understand him and their past. He said, Kuh, just observe. I know you, because I observe you and because we’re blood. The different cultural dances of communication left her frustrated and too aware of grasping at time’s slippery tail as it surged forward.

With time comes perspective. Del Rosario began to understand herself as an observer, like her father. Artists and judges observe the world and filter truths. Judges and curators make decisions. After her father’s passing, Del Rosario sifted through the objects in the family home, that had been accumulated over his lifetime. Each object acquired and kept was a decision that offered an insight into the man he was. How do we continue to care for a loved one after they pass? What rituals do we create and maintain? Del Rosario selected from his extensive rock collection and built structures to hold them. The material remnants of her father are her only remaining access to know him. She taps familial memories she doesn’t understand and through the act of making the sculptures, recreates those memories with control and creates an understanding. It’s a collaboration that parallels father and daughter and builds mutual understanding while evolving the ancestral home as a place of family, value, and community.